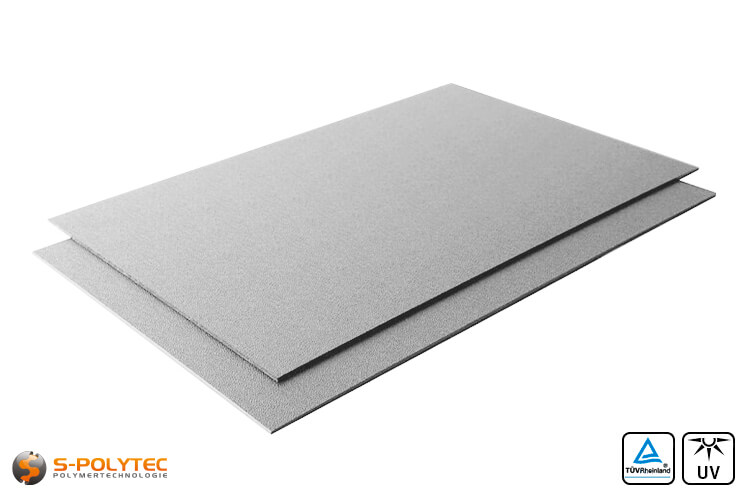 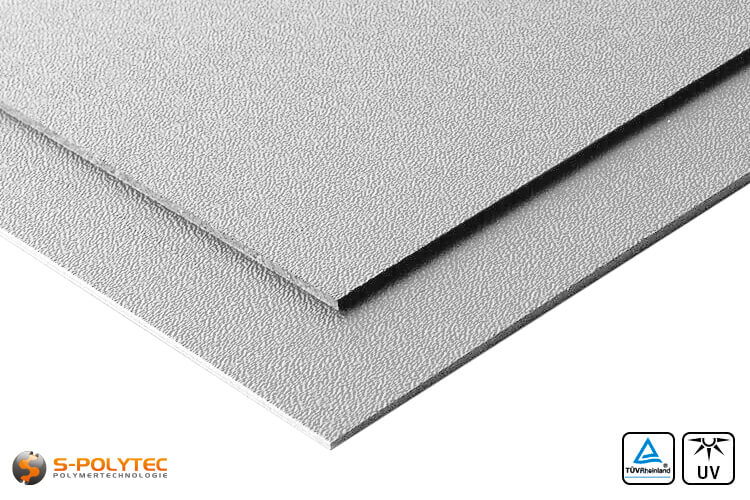 Buy our TÜV-certified ASA/ABS sheets in grey in millimetre-precise cuts directly from the specialist dealer.

Our ASA/ABS sheets in grey (RAL7040, window grey) are fully coloured, weather and UV resistant and therefore suitable for outdoor use. In addition, our ASA/ABS sheets have been successfully tested by TÜV for their resistance to splintering.

Our grey ASA/ABS sheets with a one-sided ASA top layer have a medium grain, which you can see very well in the picture with the detailed view. The grey colour of the ASA/ABS sheets corresponds to RAL7040 (window grey). The panels are coloured grey throughout, so that the RAL colour can also be seen on sawn and milled edges and are available in a thickness of 2mm or 4mm.

ABS sheets are not UV-resistant. ASA/ABS, on the other hand, is a special plastic in which an ASA top layer with UV- and weather-resistant properties is inseparably co-extruded with the ABS carrier in an extrusion process.

Comparison of ASA/ABS and ABS

Order your ASA/ABS sheets in RAL7040 window grey conveniently online directly in the size you need. Simply enter your required dimensions for length and width and choose between a thickness of 2mm or 4mm. Cutting is done on one of our panel saws with high-precision CNC control and a very low sawing tolerance of +/-1mm. Thanks to a constant stock of grey ASA/ABS sheets, the cutting is carried out promptly so that we can deliver your UV-resistant ABS sheets in the desired size quickly.

Application examples of ASA/ABS in grey

Our ASA/ABS in grey sheets can be processed in almost all known ways. From cutting methods such as sawing, milling or grinding, to cutting with CO2 lasers or water jet cutting systems, ASA/ABS can be cut in any way. Drilling ABS sheets with ASA top layer is also no problem. A standard cordless screwdriver is sufficient for this.

Thermoforming or thermoforming is not a great challenge with grey ASA/ABS plastic. Therefore, ASA/ABS can be drawn into almost any shape and then painted, provided the appropriate knowledge is available, as is very often the case in model making or in the production of costumes.

Basically, sticking or printing on our grey ASA/ABS sheets is no problem, but due to the grained ASA top layer, large-area film stickers only adhere permanently to a limited extent. However, this also depends on the film thickness and the adhesive strength of the film. ASA/ABS in grey can be bonded excellently and thanks to the weather-resistant ASA surface, these sheets are therefore also perfectly suitable for large-area cladding of facades.

NOTE: Our grey ASA/ABS sheets are not provided with a protective film due to the grained ASA surface.