Conductive plastic sheets at a glance

Our conductive plastic panels for dissipating electrostatic charge (ESD for short) and how this is created is in the detailed overview.

Conductive plastic sheets at a glance

Plastic sheets with electrical conductivity, such as our PE-EL or PP-EL-S sheets, are being requested more and more frequently, so we would like to compare the two conductive plastics here in a brief overview. In contrast to the self-conducting plastics, the conductivity of the black sheets is ensured by a conductive carbon black, so that the designation conductive polypropylene or conductive polyethylene is actually not quite correct, because unlike the intrinsically conductive polymers, as the self-conducting plastics are also called, the specific resistance is higher, which is why the plastic sheets with electrical conductivity that we offer are generally used to dissipate electrostatic charges.

Both our polypropylene sheets and our polyethylene sheets with electrical conductivity have a contact resistance of about 106 Ω*cm and therefore do not differ in their conductivity. Due to the carbon black content, both plastics are not approved for contact with foodstuffs and have good resistance to chemicals. Neither of these plastics can be bonded without special adhesives and are therefore usually welded with a conductive welding rod to ensure conductivity, because conductive adhesives for PE or PP are not available on the market. 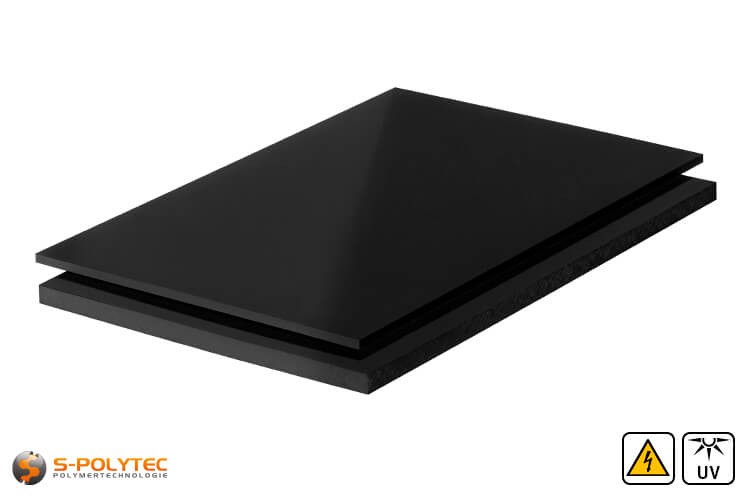 The biggest advantage of our conductive polyethylene sheets is their UV and weather resistance. Polyethylene also does not absorb moisture from the environment, so as waterproof plastic sheets they can be used indoors and outdoors without any problems. The conductive polypropylene sheets, on the other hand, can only be used in areas where the sheets are protected from UV radiation and weathering. Another advantage lies in the application temperature range. Although both can be used at temperatures up to +80°C, polyethylene is frost-resistant and can withstand temperatures of -20°C permanently. On the other hand, our PE sheets are not flame retardant. Our conductive PE sheets have the typical features of PE, such as excellent resistance to chemicals like strong acids, strong alkalis and solvents, the good sliding properties or the very good impact strength. However, polyethylene is also somewhat more sensitive to scratches than polypropylene.

In our shop we offer you the black polyethylene sheets in the standard format of 2.0x1.0 metres in many different thicknesses already from 3mm thickness up to 60mm thickness at favourable prices. 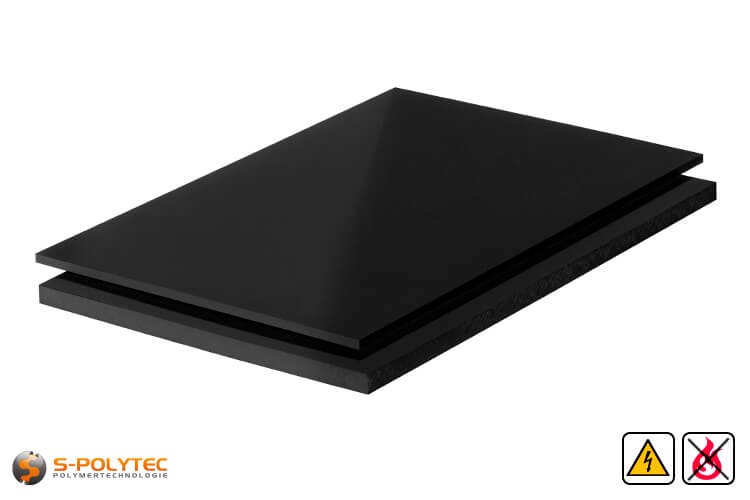 In contrast to the PE-EL sheets listed above, our conductive polypropylene sheets are not UV and weather resistant, but they are considered flame retardant and meet the strict criteria according to UL94 V0. The temperature range of our flame retardant, conductive PP sheets is between 0°C and +80°C and therefore cannot be used in sub-zero temperatures. Polypropylene has good sliding properties and good chemical resistance. The slightly higher surface hardness has the advantage that the surfaces scratch less quickly than the surfaces of our polyethylene sheets. On the other hand, this plastic is also slightly less impact resistant.

In our online shop we offer our PP-EL-S sheets in the colour black in thicknesses from 10mm to 30mm in the standard format of 2.0x1.0 metres at favourable prices.

What does ESD mean?

However, electrostatic discharges occur far more frequently than one might think at first, even if they are usually rather harmless. When wearing synthetic clothing, it can become so charged that you get a small electric shock when you come into contact with a conductive object that has contact with the earth (this is also referred to as existing earthing), such as a radiator or a water tap. This is also a form of electrostatic discharge. However, most ESDs are so low that the human body cannot perceive them, but this does not mean that they cannot have a damaging effect on electrical components such as working memory for computers or circuit boards of measuring instruments, because the flash memories and small SMD components of the circuit boards can be damaged or completely destroyed even by small discharges.

How does electrostatic discharge occur?

Normally, the proportions of electrons and protons in atoms are always identical, so that the atom has an electrically neutral state and thus no charge prevails. When two materials (for example plastic and wool), which ultimately consist of countless atoms, rub against each other, the ratio of protons and electrons of the atoms is brought out of balance. This causes a single electron of an atom of one substance to jump over to another atom of the other substance. In our example, the plastic would absorb the electrons of the atoms of the woollen jumper due to its stronger atomic bond and would thus be statically negatively charged. The woollen jumper, on the other hand, has too few electrons and therefore the number of positively charged protons is greater, resulting in a static positive charge. Both substances, the negatively charged plastic and the positively charged woollen jumper, want to restore the balance of the atoms and this is done by electrostatic discharge with an earthed, conductive body.

How plastic is made conductive

With electrically conductive plastics, on the other hand, the contact resistance is about 106 Ω*cm. This corresponds to 1,000,000 Ω*cm or 1,000 kΩ*cm. This value is nowhere near the volume resistivity of electrical conductors used in circuit boards or cables. For comparison - copper in cables has a specific resistance of only about 1.71 Ω*m. Silver is even lower with a value of about 1.58 Ω*m and thus conducts even a little better.

For the sake of completeness, it should be mentioned that there are also plastics that have a comparable conductivity to metals. These conductive plastics, which are also called intrinsically conductive polymers or self-conducting polymers, enable free mobility of electrons through conjugated double bonds during the polymerisation process. However, such plastics, which include polyparaphenylene (PPP) or polypyrrole (PPy), are not only very expensive, but also cannot be thermally processed.

Electrically conductive plastic sheets are always used when electrostatic discharge can pose a danger to people or machines. Particularly when handling explosive substances, discharging the static charge via the conductive plastic prevents an uncontrolled discharge in the form of sparking from causing an explosion.

The international DIN 61340 series of standards regulates the circumstances under which certain regulations for the construction of and compliance with ESD protection zones and ESD protection measures must be observed.

During the production, preparation or processing of flammable liquids, dusts or granulates, the friction of the substances on the conveyor technology used can lead to a static charge. This is the case, for example, in the production of paints, fuels or adhesives. It is not always possible to dispense with the use of chemically resistant plastics such as polyethylene or polypropylene, so that plastic sheets made of electrically conductive PE or PP are used for the conveyor containers and machine components where electrostatic charging cannot be completely ruled out.

Another example of the use of electrically conductive plastics is office furniture, such as table tops or swivel chairs, which are used in ESD protection zones, as is the case in a clean room, for example, where even the slightest static charge caused by clothing rubbing against the surfaces of the office furniture could destroy tiny electronic components.

However, a conductive plastic sheet alone is not sufficient to dissipate the static charge, so that sufficient earthing of the plastic sheets must always be ensured, as otherwise the conductive PE and PP sheets could also become so statically charged that an uncontrolled discharge can occur. This can be done either by connecting a protective conductor directly to the plastic sheet itself, or by direct contact with a metallic object earthed by a protective conductor. In the case of office furniture, a conductive floor covering is also conceivable and is not infrequently used in practice.

Privacy Notice:
If you use the sharing function of this article, personal data such as IP address, name or email address may also be used to the corresponding social media platform. By activating the checkbox, you consent to the transfer of personal data.