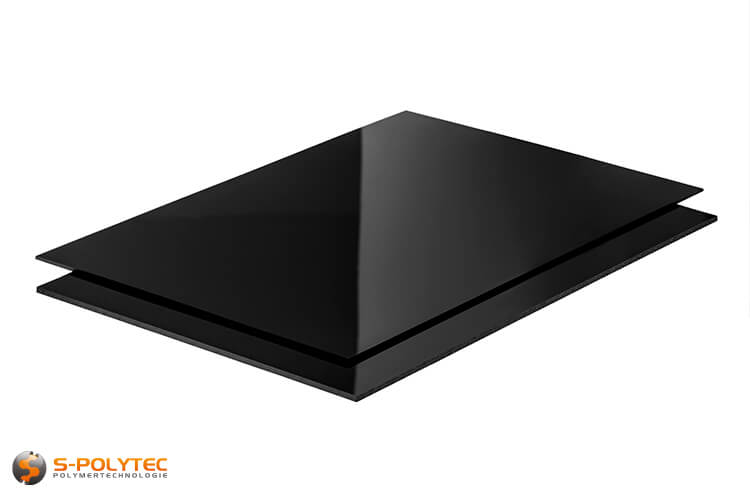 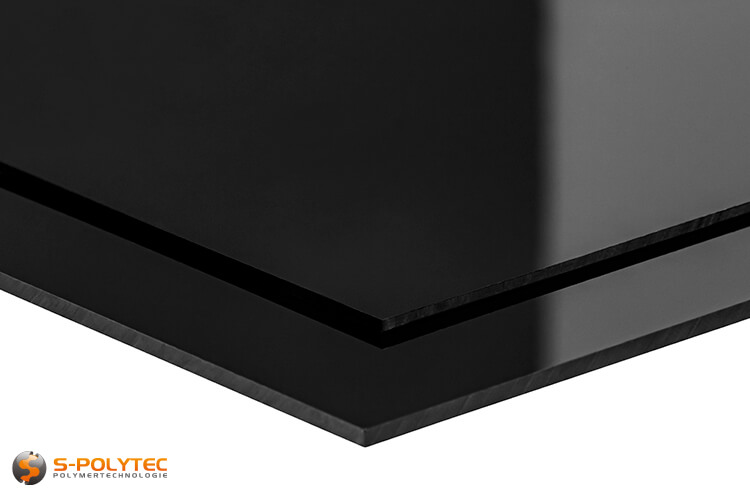 Polystyrene sheets in black (similar to RAL 9005, Jet black) highgloss in the standard format 2,0 x 1,0 meter in 2 mm or 3 mm thickness of High Impact Polystyrene (HIPS) from the retailer S-Polytec. Quality Made in Germany

Our standard black polystyrene plates with a format of 2000mm x 1000mm are available in thicknesses 2mm and 3mm via our online shop. The surfaces of the black plates are high glossy and are similar to the color RAL 9005 (Jet black). The massive panels are completely dyed, so that the surfaces as well as the cut edges have the same deep black color. Our PS plates are always massive plate products from German production and not plastic plates with a foamed core. To protect the sensitive surface, our glossy plates are equipped on one side with an easily removable protective film to prevent scratching before or during processing. The protective film is not deep drawable, so it should be removed before thermoforming.

Our black polystyrene panels in a standard format of 2,0 x 1,0 meters are made of high impact polystyrene - also abbreviated HIPS and have a higher impact resistance than polystyrene in its original form. Polystyrene is a very cheap plastic and with a share of about 10% of the total production volume of plastics, is the fourth most common plastic and is used in almost all imaginable areas. Polystyrene is most commonly used in foamed form for food packaging, sound or heat insulation.

Based on the very low extruded temperature of approximately 90 ° C, polystyrene, as well as comparative illustrations, resembles polystyrene plastic fittings and resides in the industrial design of office and plastic articles for electrical equipment. Polystyrene is flammable and non-whitish resistant to whitening, so that the plastic sheets of PS cannot be matched with any appropriate surface protection in the all-purpose. The operating temperature ranges of Polystyrene lies between -10°C and + 70°C, for which most applications were generally outlined. A higher temperature-consuming temperature is said to have the effect of ABS plastics, which maintain temperatures of + 90°C.

As an alternative to our standard polystyrene plates in size 2000mm x 1000mm, we also offer you this inexpensive plastic in the cut. With our blank configurator, you have the opportunity to make specifications for the dimensions you need and we deliver your PS plates in high-gloss black to the exact size you want to the millimeter. In addition, we offer on our website for recycled plastics www.polytec-regenerat.de also recycled black polystyrene sheets in thicknesses from 1mm to 10mm , which are extruded to a minimum of 500kg, just the way you want them.

Polystyrene is considered as a hobby plastic and is very often used because of its easy processability in model making. This plastic is very easy to work with commercially available tools and so blanks with a simple cutter knife are possible even in low strengths. Our black PS standard plates can be sawed, milled, ground and punched. It is also possible to cut it with a CO2 laser to produce filigree blanks with complex shapes.

As a thermoplastic, polystyrene is perfect for thermoforming and can be thermoformed even at very low temperatures of about 90°C. This thermoforming parts are theoretically possible already in the oven, as practiced by “Hobbythermoformern” in model making quite well. Due to the low softening temperature and a comparatively short heating time, the industrial serial production of plastic parts by deep drawing is extremely efficient. The low price of this plastic contributes to the fact that polystyrene plates are used in the mass production of giveaways, office supplies, toys and housings for small electrical appliances.

Polystyrene can be lacquered excellently and so especially in modeling the many individual plastic parts are painted with attention to detail. Especially with larger areas, a bonding agent should be used as a primer to ensure a long-lasting hold of the paint on the surface. Also the sticking with a foil for example in digital printing is possible to use the inexpensive plastic plates as advertising signs. Bonding with a suitable adhesive, such as our Ruderer L530 model adhesive, as well as welding with a PS welding wire, are methods that can be used for joining PS plastics.

NOTE:Our polystyrene standard sheets in black with a high-gloss surface are supplied with a one-sided protective film. We recommend to remove the protective film only after processing.