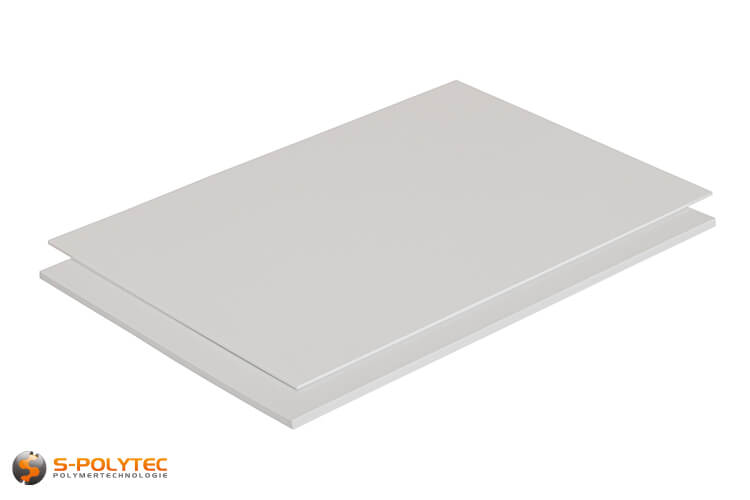 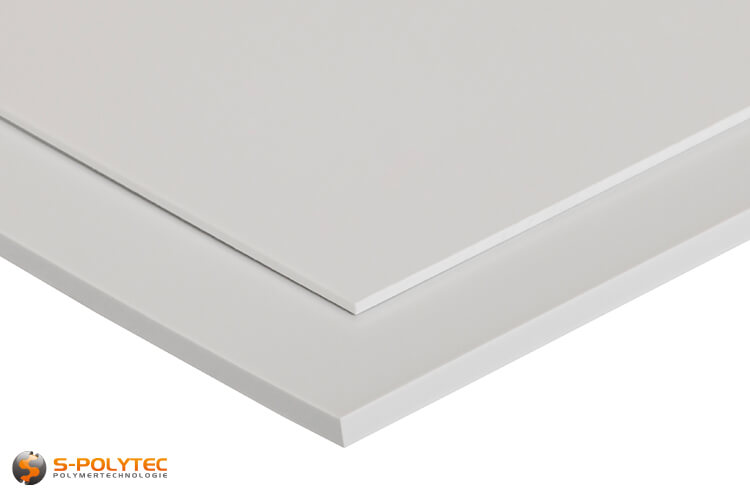 Polystyrene plates in white (similar to RAL 9003, signal white) in the standard format 2,0 x 1,0 meter in thicknesses 1mm, 1,5mm, 2mm 3mm, 4mm and 5mm made of high impact polystyrene (HIPS) from the retailer S-Polytec. Quality Made in Germany

Our standard polystyrene matte white boards with a format of 2000mm x 1000mm are available in thicknesses from 1mm to 5mm. The smooth surfaces of the white panels are similar in color RAL 9003 (signal white) and are fully dyed, so that surfaces and cut edges have the same white color. Our white polystyrene plates are made in Germany. These are massive plastic sheets made of high impact polystyrene (HIPS) with increased impact strength and not rigid foam sheets with foamed core made of polystyrene.

Our white PS standard panels are made of high impact polystyrene (HIPS), which offers improved impact resistance compared to traditional polystyrene. It is suitable for temperatures from -10°C to + 70°C, but can not be used for outdoor applications without sufficient surface protection by coating or laminating with an UV protective film, as polystyrene is not weatherproof. If the surface protection fails, the beautiful white color can get yellow due to UV-radiation and the plastic becomes increasingly brittle over time.

Polystyrene is the perfect plastic for thermoforming and can be thermoformed even at a very low temperature of about 90°C. PS is not only a cheap plastic, it is also cost-efficient in the further processing and is very often used for these reasons in the industrial mass production of plastic parts such as office trays, plastic cans, plastic cutlery and many more.

If you can't or do not want to cut our white polystyrene sheets yourself, we offer you the possibility to buy the polystyrene sheets in matt white in the cut with our cutting service. Enter the desired dimensions for the length and width in millimeters in our blank configurator and select the required thickness and we deliver your desired plates to millimeter precision to your specifications. In addition, we also offer you our cheap PS plates in black as a standard plate or in the cut.

Polystyrene is very easy to work with and can be cut to small thicknesses with a pair of scissors or a cutter knife, which is why our white polystyrene plates are often get called as crafting plates by customers. Even in higher thicknesses, the white standard plates do not place high demands on the processing, so that simple tools for wood processing are sufficient to bring the plates to the desired size. Cuts can be made by sawing, milling, punching or with a CO-laser. Grinding, drilling or screwing are also possible techniques for processing polystyrene.

With a very low softening temperature of just 90°C, polystyrene is perfect for thermoforming and can also be thermoformed in a conventional oven without the need for a special thermoforming machine. This characteristic, combined with the low price, is an important aspect especially for the amateur thermoformers and is therefore not only used in the industrial production of deep-drawn parts made of polystyrene.

Our white polystyrene panels can be excellently lacquered, but we recommend the use of an adhesion promoter as a primer for larger surfaces to ensure a long-lasting hold of the paint. Polystyrene can also be covered with a foil or digital print. In addition, the white polystyrene plates are also suitable for direct printing and can be used so excellent for advertising signs and panels. For outdoor use, we recommend protecting the print with a UV-protection laminate or clearcoat from the weather, as the white polystyrene sheets are not UV-resistant. For adhesives, conventional solvent-based plastic adhesives are suitable, such as our Ruderer L530, which you will find in the online shop in the Adhesives category. The welding with a polystyrene welding wire in the color white, is also a conceivable method to put the white polystyrene plates permanently and safely together.